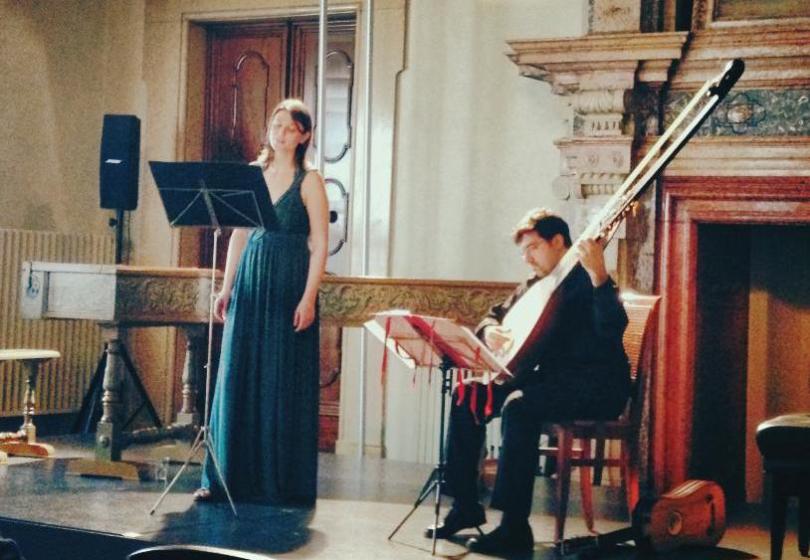 Echo intends to take the public through the pages of the most beautiful music ever written for voice accompanied by plucked instruments into the fascinating history of the evolution of these instruments, emphasizing in the background the biggest History of Music. The group performances, historically informed, respect the canons of musical philology in accordance with the treatises of the era. Depending on the performed repertoire, the ensemble can be expanded through the inclusion of other instruments such as strings, winds, harpsichord and organ.

“From continuo to guitar: journey into music through the evolution of plucked instruments”

The combination of voice and plucked instruments has roots in ancient times. Already in medieval time, troubadours and trouvères used to cheer the French nobility accompanied with a lute. Not to mention the practice of serenade, whose origins are lost in the mists of time: which instrument if not a lute, a guitar or a mandolin may accompany the voice of a lover who declares his love to his beauty in the magic of the vespers? Just some examples of these serenades in famous works: Paisiello, The Barber of Seville, mandolin; Mozart, Don Giovanni, mandolin; Rossini, The Barber of Seville, guitar; Verdi, Falstaff, guitar; Wagner, Die Meistersinger von Nürnberg, lute.
The “official” birth of this combination can be dated January 14, 1573, the day of the first meeting of the Florentine or de’ Bardi Camerata at the home of Count Giovanni Bardi in Florence: at the hands of musicians and singers, such as Giulio Caccini (1551 – 1618), Vincenzo Galilei (1520-1591, father of the scientist – also lutenist – Galileo) and Jacopo Peri (1561-1633), recitar cantando was born and later will develop to melodrama. Another important date was certainly the year of grace 1589, during which in Florence was celebrated the marriage between Grand Duke of Toscana Ferdinando I de ‘Medici and Cristina di Lorena: historical records of the time document the performances of Caccini – in the context of the famous Intermedii for the comedy La Pellegrina (The Pilgrim) – who sang accompanying the theorbo. Thus, we can say without fear of contradiction, that the combination of voice accompanied by plucked instruments coincides with the birth of melodrama itself!
Throughout the Baroque period, instruments as archlute, theorbo and “spanish” guitar were used both in the solo context and for the realization of basso continuo throughout Europe and beyond. Later, at the turn of the eighteenth and nineteenth centuries, the guitar becomes (or continues to be, transforming by the now ancient baroque shapes into the six-string guitar) an instrument present in every home: nascent bourgeoisie will organize the so-called academies (or musical afternoons/evenings) in which the guitar will be one of the most popular instrument and practiced by beginners. During this time most of the guitar repertoire develops, both solo or ensemble music: composers such as Carulli, Giuliani, Sor and many others contribute to the formation of the classical repertoire for voice and guitar.
At this time, in addition to the original pages for guitar, a substantial part of the works recalls the “practice” of epocal transcription, the procedure which involves tailoring of successfull or particulary a la page pieces for personnel different from his origin, often written with the consent of the author or the express request of the publisher. In this category of repertoire, work that refers to the originals of Rossini as well as adaptations of famous Lieders of the real “giants” in the history of musical language as Haydn, Mozart, Beethoven and Schubert stands out for quality and quantity. Among the musicians who will engage in this practice there is Anton Diabelli (1781-1858) and Wenzeslaus Matiegka Thomas (1773-1830) in addition to Carulli and Giuliani who transcribed very famous pages of Rossini. These procedures were designed to “advertise” and convey the original works and were also a way to have fun performing the hits of the moment, even if there was not available a full-bodied personnel (see, eg, transcriptions of arie from the most famous Opera of the time).